The Howard Hughes Corporation®, developer of the Summerlin® master-planned community (MPC) and its 400-acre Downtown Summerlin®, today announced a comprehensive vision for the area’s walkable urban center that includes a new Class-A office building, 1700 Pavilion, along with a second phase of the Tanager luxury apartment complex, Tanager Echo.

The revitalized master plan is the result of an extensive exploration of new ways to integrate innovative design, architecture, and state-of-the-art amenities into Summerlin’s downtown urban core, while enhancing Downtown Summerlin’s connectivity—between its retail area and entertainment offerings, and with the natural setting that defines the award-winning community.

The new ten-story office building, 1700 Pavilion, spans 267,413 square feet and is situated on just under three acres directly south of the Las Vegas Ballpark®, featuring vantage points with one-of-a-kind views of the entire valley, from The Strip to Red Rock Canyon. 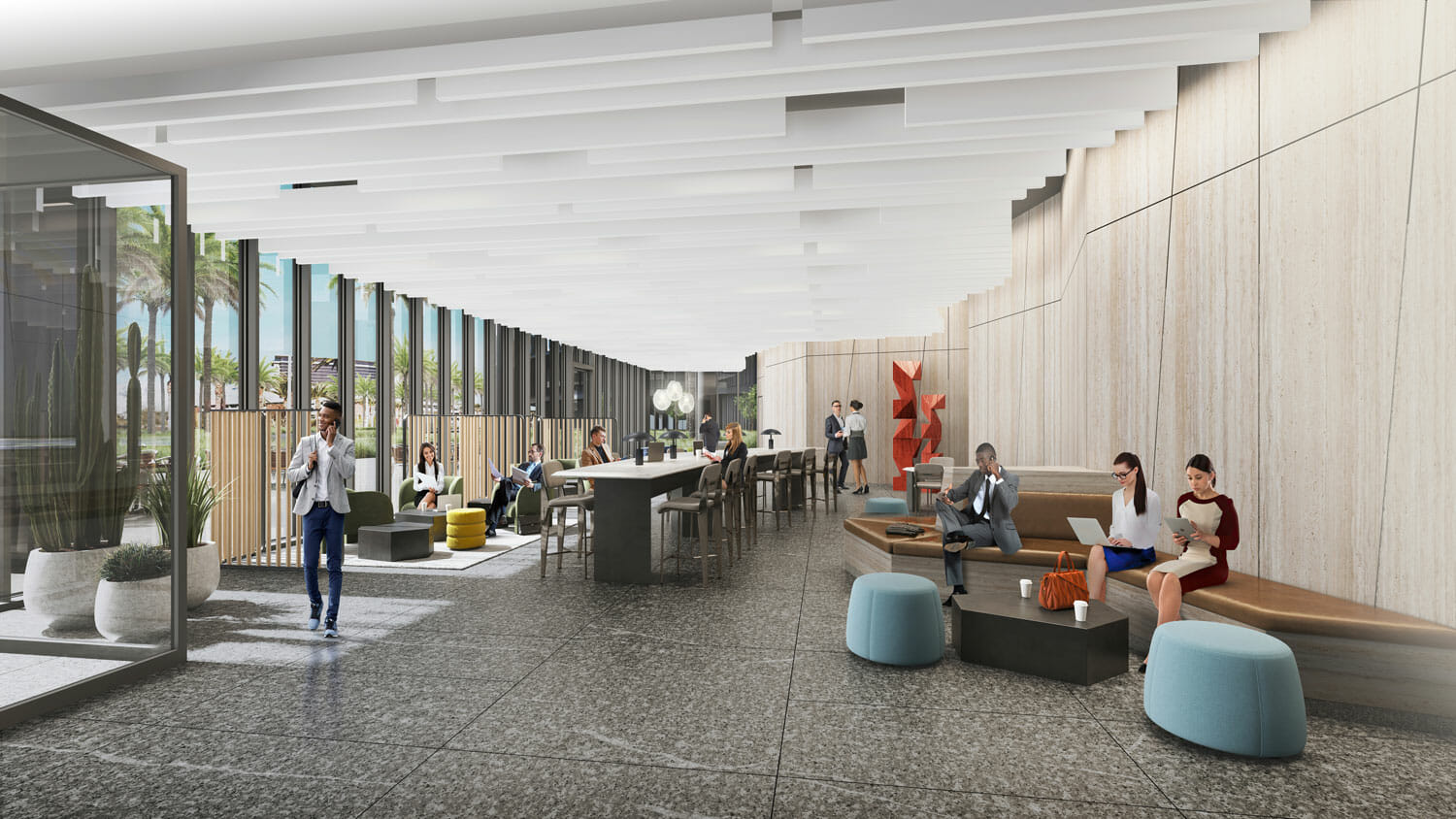 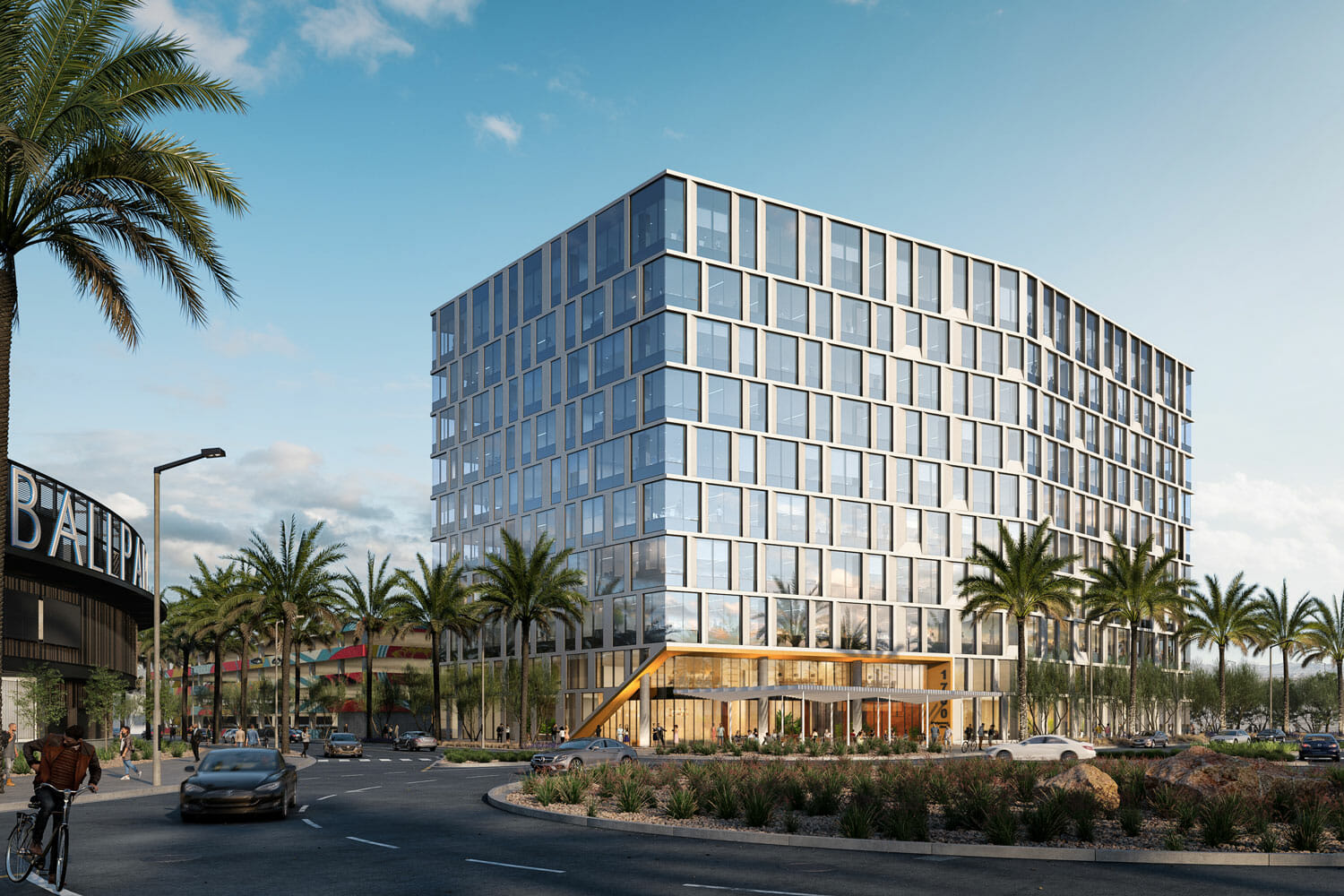 The building’s arrival experience is shaped by the Living Room—a shared common area within the first-floor lobby providing a large, reservable conference room and gathering spaces—with direct access to Pavilion Center Drive, retail and dining options across the street.

1700 Pavilion embodies the healthy, active lifestyle for which Summerlin is known, promoting bike-to-work capabilities with secure bike storage. The building also exemplifies Summerlin’s commitment to health and wellness, with touchless entry from the garage to the tenant suites and enhanced air filtration.

Tanager Echo will provide Downtown Summerlin with new options for luxury living. The 295-unit development will be situated on nearly three acres, planned as a five- to six-story building that will wrap around a 455-space parking garage allowing tenants direct parking access to their floor of residence. The building will feature a mix of studios, junior one-bedroom apartments, single- and two-bedroom apartments—along with corner units with wrap-around balconies and lofts on the top floor—featuring 9-foot ceilings, large walk-in closets, premium finishes, and stainless steel appliances. Tanager Echo provides touchless access into the building and Wi-Fi is provided throughout the common areas. 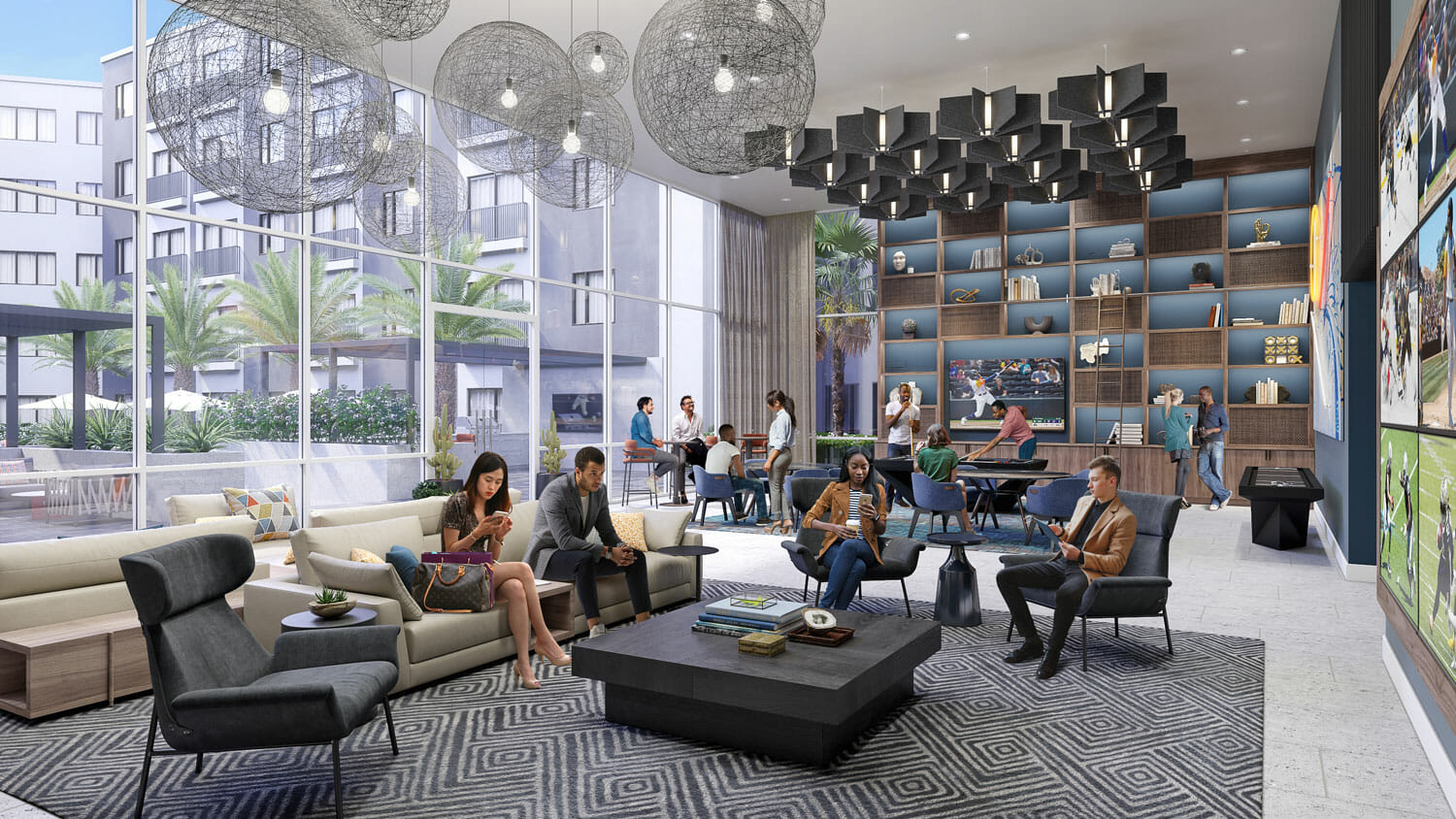 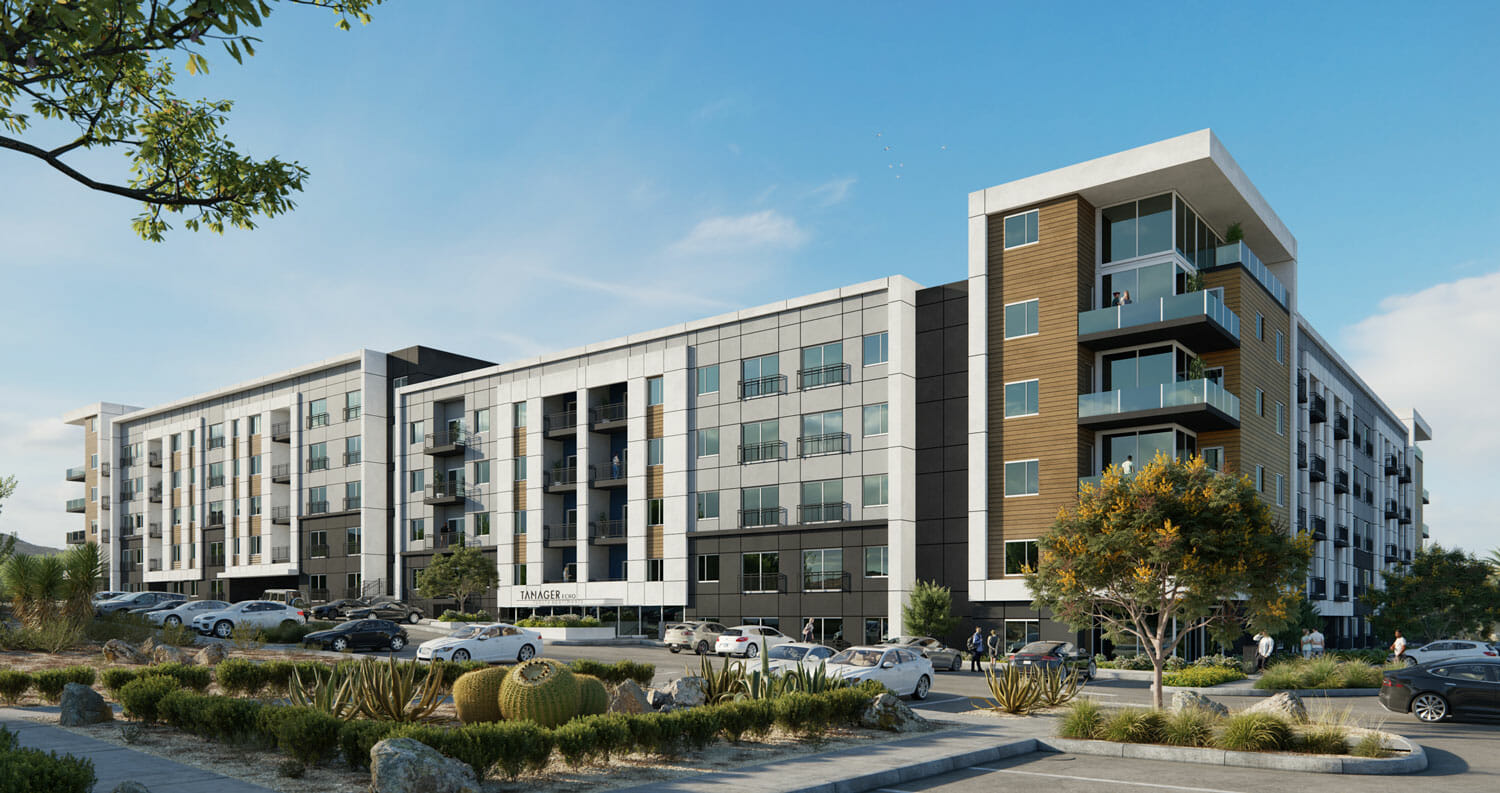 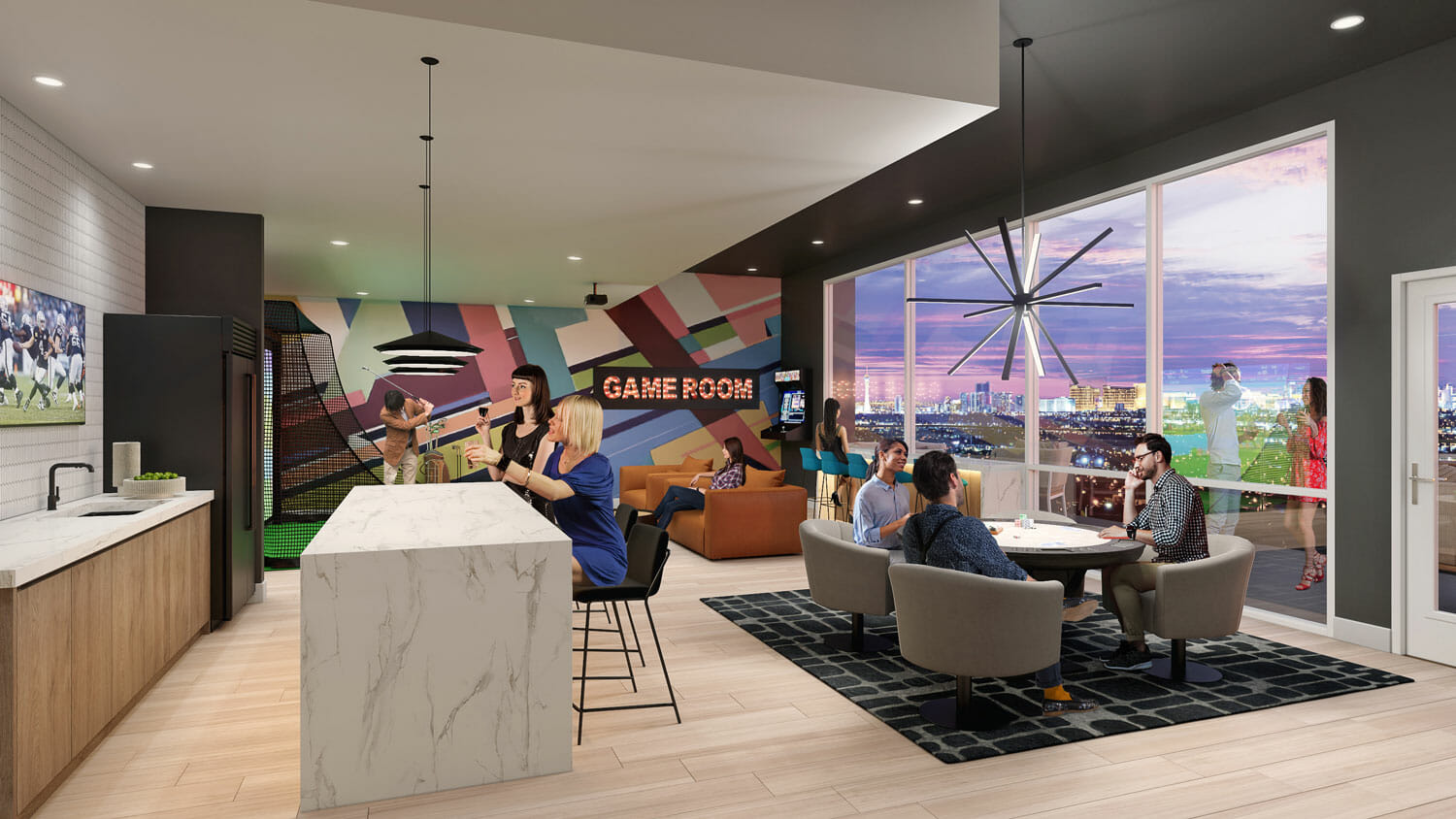 According to Kevin T. Orrock, President of the Las Vegas Region for The Howard Hughes Corporation, both projects reflect the master plan vision for Downtown Summerlin to be an amenity-rich, walkable urban core where residents can live, work, shop, dine, and be entertained—all within steps of their front door in the heart of Summerlin.

“Demand for working close to home is on the upswing—both locally and nationally—along with demand for urban-style living surrounded by all the conveniences that make for an enriching and fulfilling lifestyle,” said Orrock. “The pace at which we have leased our previous two office buildings and Tanager speaks volumes about that demand.”

“Another accelerating trend is corporations looking to relocate to communities such as Summerlin that offer an exceptional, high quality of life in a low-tax, business-friendly environment,” continued Orrock. “Not only does working close to home reduce commutes, but office employees in the Downtown Summerlin area enjoy easy access to Las Vegas Ballpark and City National Arena and to all that Downtown Summerlin offers. This urban walkability is an attractive amenity to all demographics—from millennials to empty-nesters—seeking to customize their footprint while upgrading their lifestyle. Tanager Echo continues Tanager’s standard-setting expectation of what urban living looks and feels like within our region’s premier master-planned community.“

1700 Pavilion and Tanager Echo will be built simultaneously, with construction expected to begin in the second quarter of 2021. 1700 Pavilion and the new master plan for Downtown Summerlin were designed by Hart Howerton, an interdisciplinary planning, architecture, and interior design, firm. KGA Architects, a full-service architecture firm with over 40 years of experience specializing in a broad range of product types, completed the production documentation for the 1700 Pavilion parking garage. Whiting-Turner will provide construction management services and the project will be complete in the third quarter of 2022. CBRE is the office broker of record. For information contact Randy Broadhead, randy.broadhead@cbre.com, or Amy Lance, amy.lance@cbre.com.

Tanager Echo is designed by Perlman Architects, an architectural and master planning firm specializing in residential and commercial properties. R&O Construction will provide construction management services and the project will complete in the fourth quarter of 2022. For more information please visit Future.Summerlin.com

I want to upgrade my home, office and life.

Page load link
We use cookies on our website to give you the most relevant experience by remembering your preferences and repeat visits. By clicking “Accept”, you consent to the use of ALL the cookies.
Do not sell my personal information.
Cookie SettingsAccept
Manage consent

This website uses cookies to improve your experience while you navigate through the website. Out of these, the cookies that are categorized as necessary are stored on your browser as they are essential for the working of basic functionalities of the website. We also use third-party cookies that help us analyze and understand how you use this website. These cookies will be stored in your browser only with your consent. You also have the option to opt-out of these cookies. But opting out of some of these cookies may affect your browsing experience.
Necessary Always Enabled
Necessary cookies are absolutely essential for the website to function properly. These cookies ensure basic functionalities and security features of the website, anonymously.
Functional
Functional cookies help to perform certain functionalities like sharing the content of the website on social media platforms, collect feedbacks, and other third-party features.
Performance
Performance cookies are used to understand and analyze the key performance indexes of the website which helps in delivering a better user experience for the visitors.
Analytics
Analytical cookies are used to understand how visitors interact with the website. These cookies help provide information on metrics the number of visitors, bounce rate, traffic source, etc.
Advertisement
Advertisement cookies are used to provide visitors with relevant ads and marketing campaigns. These cookies track visitors across websites and collect information to provide customized ads.
Others
Other uncategorized cookies are those that are being analyzed and have not been classified into a category as yet.
SAVE & ACCEPT