This is part 1 in a multi-part series about the changing nature of how and where Americans are choosing to live as we redefine the American Dream. Laura Begley Bloom is an award-winning writer for outlets such as Forbes and CNBC, a content strategist, and a travel expert who appears regularly on television, from The Weather Channel to CNN.

Early on in the pandemic, Meredith and Brendan Moore decided it was time to make a change — a big change. They had been living in a one-bedroom apartment on New York City’s Upper East Side and even prior to Covid-19 had been craving wide-open spaces, a more balanced way of life, and great weather. As a tech exec at Zillow, Meredith spends a lot of time looking at real estate listings, so she knew that Texas would be a good alternative. “We wanted to be near a city, and I literally Googled ‘best suburbs in Texas,’ and The Woodlands came up,” she says.

The Moores saw everything they were looking for in The Woodlands, an award-winning master-planned community just outside Houston, and moved there in June 2020, sight-unseen. After renting for six months, the couple doubled down, buying a house for just $320,000 — a fraction of the cost of real estate in other prime locations around the country. “It was the best decision,” says Meredith, who explains that The Woodlands isn’t really a suburb, but rather, a hybrid urban concept that combines the best of all worlds. “It’s got everything you could want: stores, restaurants, activities, concerts, and landscaping that makes you feel like you’re living in your own resort.”

Add to that, a thriving business community with plenty of job opportunities, a top-notch school system, and some of the best medical facilities in the country, and you begin to get an idea of why The Woodlands is the destination of choice for people in search of the new American dream. 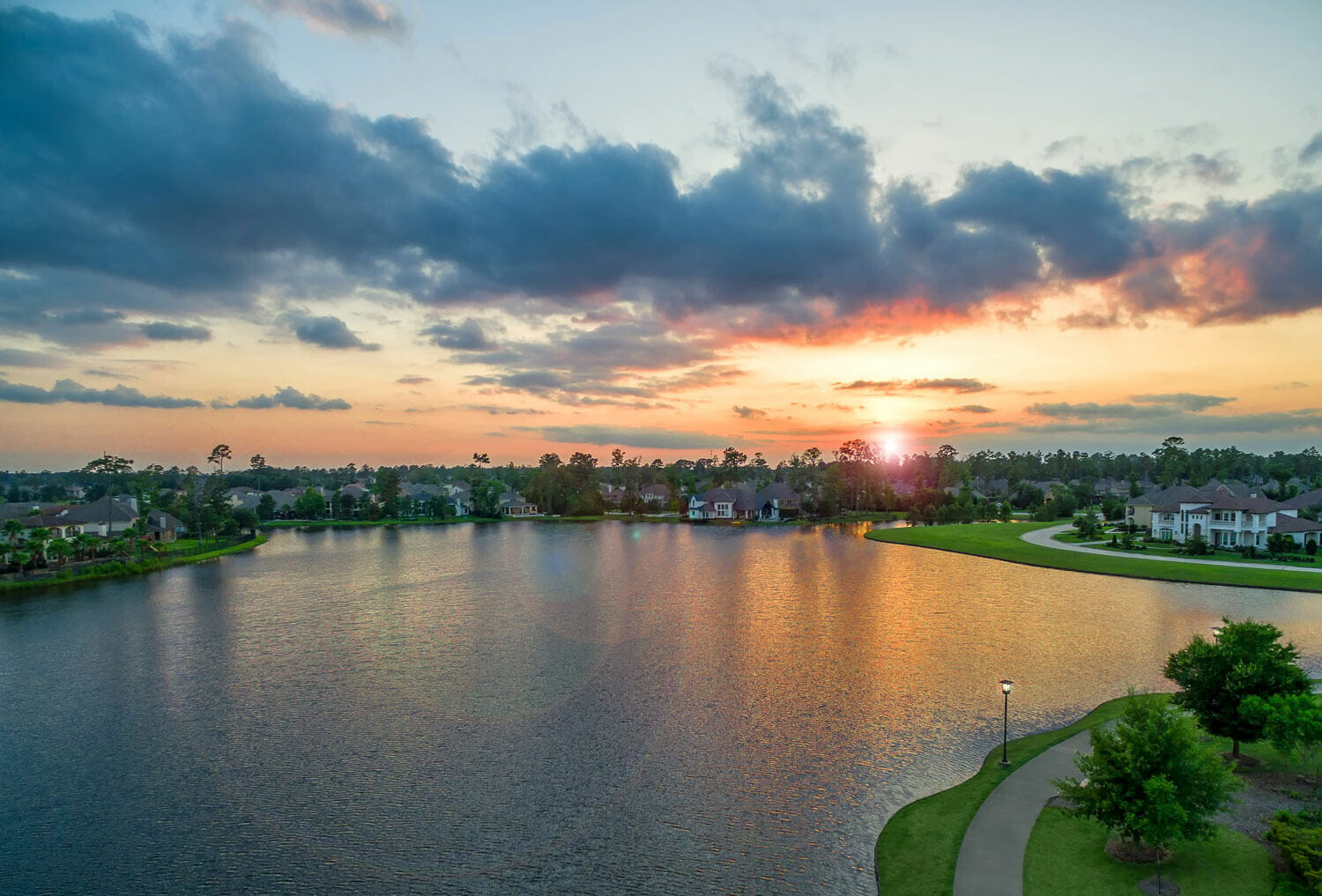 But in this case, what’s old is new. The blueprint for The Woodlands was developed in 1974 by a visionary named George Mitchell, who wanted to create a diverse, self-sustaining community with a deep connection to nature. Mitchell had been inspired by Jim Rouse, who is considered the father of the master-planned community and had created another successful concept in Columbia, Maryland seven years prior. Rouse’s intention was not to build an improved version of the suburb, but rather, to build a self-sustaining community.

Rouse described this type of development as “a garden for the growing of people.” In other words — a self-sustaining place where residents could live and work in a beautiful setting and where their real estate investments would retain value (and then some). Back in the day, Rouse explained his idea best: “The only real justification of any one of these centers is to serve the people in the area: not the merchants, not the architects, not the developers.”

That pioneering vision of those early founders gave birth to the master-planned communities that became the basis of The Howard Hughes Corporation, whose collection has grown to include not only Downtown Columbia, Maryland, and The Woodlands but also places like Summerlin in Las Vegas and, most recently, Douglas Ranch in the Phoenix West Valley. And while the concept for The Woodlands was developed almost 50 years ago, it feels just as fresh and relevant in 2021, providing the framework for a new kind of American destination with a new urban ideal: a self-sustaining community that is fostering economic, cultural, and racial harmony.

“It’s unlike any other spot where you may have 100 different developers owning pieces of land and they’re all fighting to try to be first or different or bring a certain tenant in. But none of them are sitting back and thinking about the infrastructure, community accessibility to arts, good roadways, and great schools,” says David R. O’Reilly, CEO of The Howard Hughes Corporation. “At Howard Hughes, we’re taking a holistic approach to long-term development and community partnership. We’re curating an environment that has an end game of making everybody’s life better.”

Charles Blain is the President of the Urban Reform Institute, a non-profit dedicated to preserving the American dream, promoting upward mobility for all Americans, and helping define best practices in major metro areas. His agency is currently working on a report called “The New American City” that was — ironically — commissioned by a competing developer that is looking at what’s next in urbanism, in response to the shift in demographics and accelerated migration caused by the pandemic.

“The developer out of California has been looking around the country at unincorporated counties to begin to build insular communities that are outside of the realm of burdensome local government,” says Blain. “The Woodlands is the premier entity that we are looking at in the report, because we see a lot of other entities popping up around the country that are trying to model themselves after The Woodlands — it’s the benchmark.”

Blain says The Woodlands has succeeded by offering a unique formula that is appealing to people who are leaving bigger cities. “It provides a very low cost of living for a high standard of living. You are not burdened by a lot of the bigger issues that are happening in the adjacent cities, but you’re still in close proximity. And you’re escaping the heavier hand of government by being in an unincorporated community,” he says. “I think you are going to continue to see folks moving to places like The Woodlands just to take part in that miracle.”

Coincidentally, Blain has a personal story that’s similar to Meredith and Brendan Moore’s. While he wasn’t looking to escape from the East Coast, he had been living in northern New Jersey, just outside New York City, when he was tapped for a temporary job in the Houston area in 2014. Blain had never been to Texas and had a vision of what he would encounter: “If I’m being completely honest, I thought of the typical Texas stereotype of folks riding horses in a very rural setting,” he says. “I didn’t find that at all. I found varying degrees of urban density, a high standard of living, and a level of diversity that really blew my mind.”

Indeed, the Houston area has been garnering accolades that support what Blain and the Moores discovered. Time magazine just named Houston one of “The World’s 100 Greatest Places of 2021,” alongside cities like Helsinki, Osaka, and Singapore. The finance website WalletHub named Houston the most diverse city in the country for the second year in a row. And a Financial Times study named Houston one of the top 10 American cities of the future.

Blain was supposed to head back east after his Houston gig was done, but instead, he stayed in the area and is now contemplating a move to The Woodlands. “I was only supposed to be here for six months, but after seeing it firsthand and immersing myself in the general region, I knew that this was where I wanted to stay,” he says. “I always say that this area, from The Woodlands down to Galveston, provides folks with opportunities that you don’t find elsewhere.” 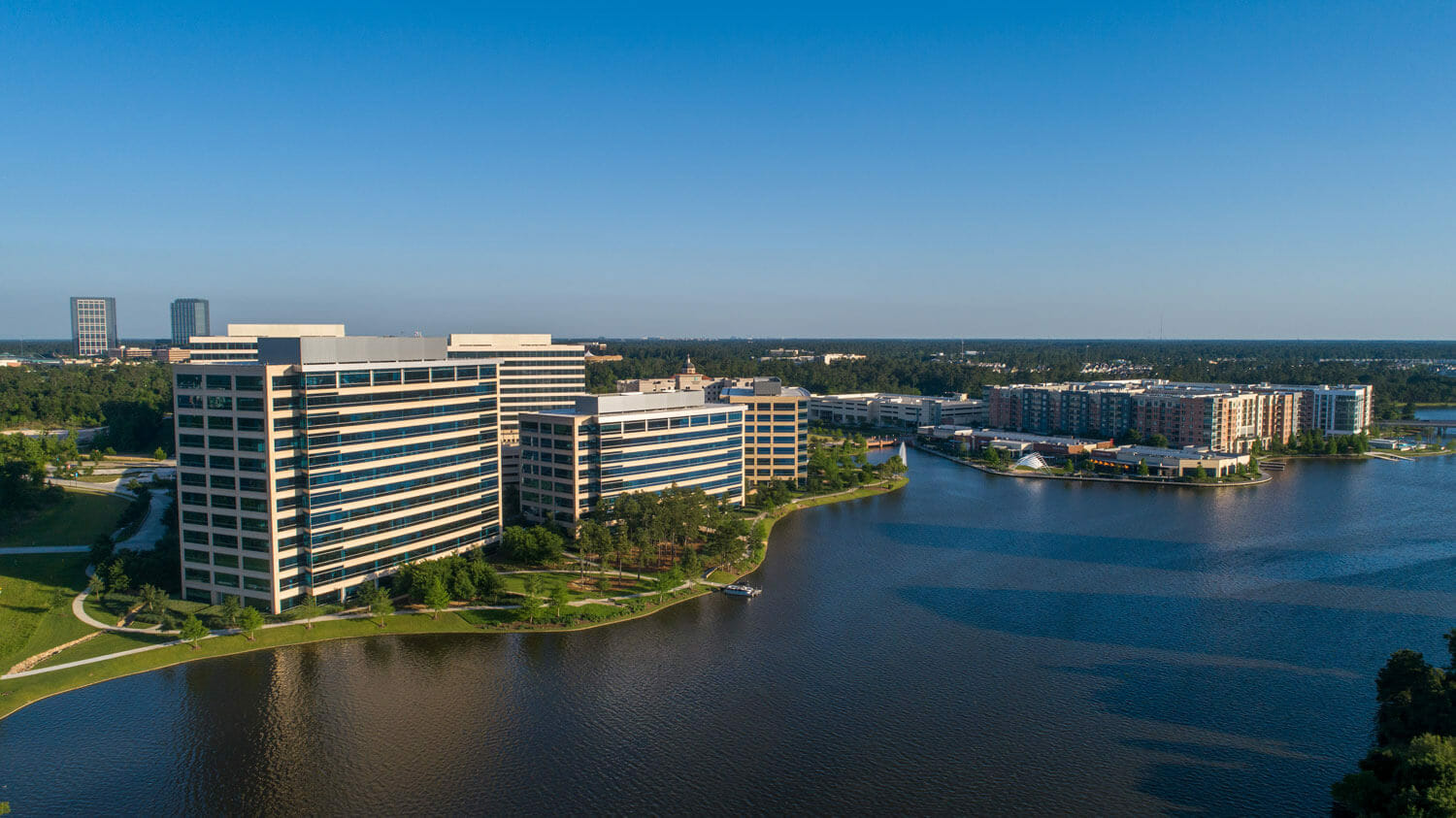 Another transplant who has witnessed those same opportunities — both on the home front and at work — is Justin Kendrick, CEO of Memorial Hermann The Woodlands Medical Center and Northeast Hospital, which has a base in The Woodlands. In 2014, Kendrick relocated from the Texoma region with his wife and young children in tow. After previously experiencing three other neighborhoods in the Houston area, they zeroed in on The Woodlands, which Kendrick says is the best place they’ve ever lived. “There’s a great support structure for young families. The school systems are phenomenal. The parks are phenomenal,” says Kendrick. “There’s a big sense of community that you don’t get in a lot of other suburban environments. It’s been well planned out from the get-go.”

As CEO of a major medical center, Kendrick has also been struck by the access that he and other local employers have to top-notch job candidates, from the highly skilled, highly educated workforce that’s already based here to the new job candidates that are lured by all the advantages this area has to offer. “It’s an easy place for us to attract rock-star staff, rock-star physicians,” he says. “The Woodlands has developed a reputation for being a work-hard/play-hard place that attracts all-stars. The level of success is shown by the companies that have located here.”

With so many businesses based in The Woodlands, from Occidental and the Huntsman Corporation to SmartDraw Software (a trailblazing technology company), this has become a hotbed for economic opportunity. “Our county, as a whole, is one of the fastest growing counties in the nation and our community has turned into a regional center for jobs,” says Gil Staley, CEO of The Woodlands Area Economic Development Partnership.

Then there’s the access to jobs throughout the Greater Houston region. The Houston area is fast becoming a technology hub, with the 11th-largest tech workforce in the U.S. — minus the problems that have plagued other technology centers like Austin, which has some of the worst traffic in the United States, soaring home prices, and issues with homelessness. And of course, there are the heavyweight industries that Houston was built on, like oil, gas, healthcare, and education.

“Corporations are asking themselves not just ‘Where do we want our business to thrive?’ but ‘Where do our executives and—most importantly—where do our employees want to live?” says Jay Cross, President of The Howard Hughes Corporation. “Basically, all roads lead to The Woodlands.” 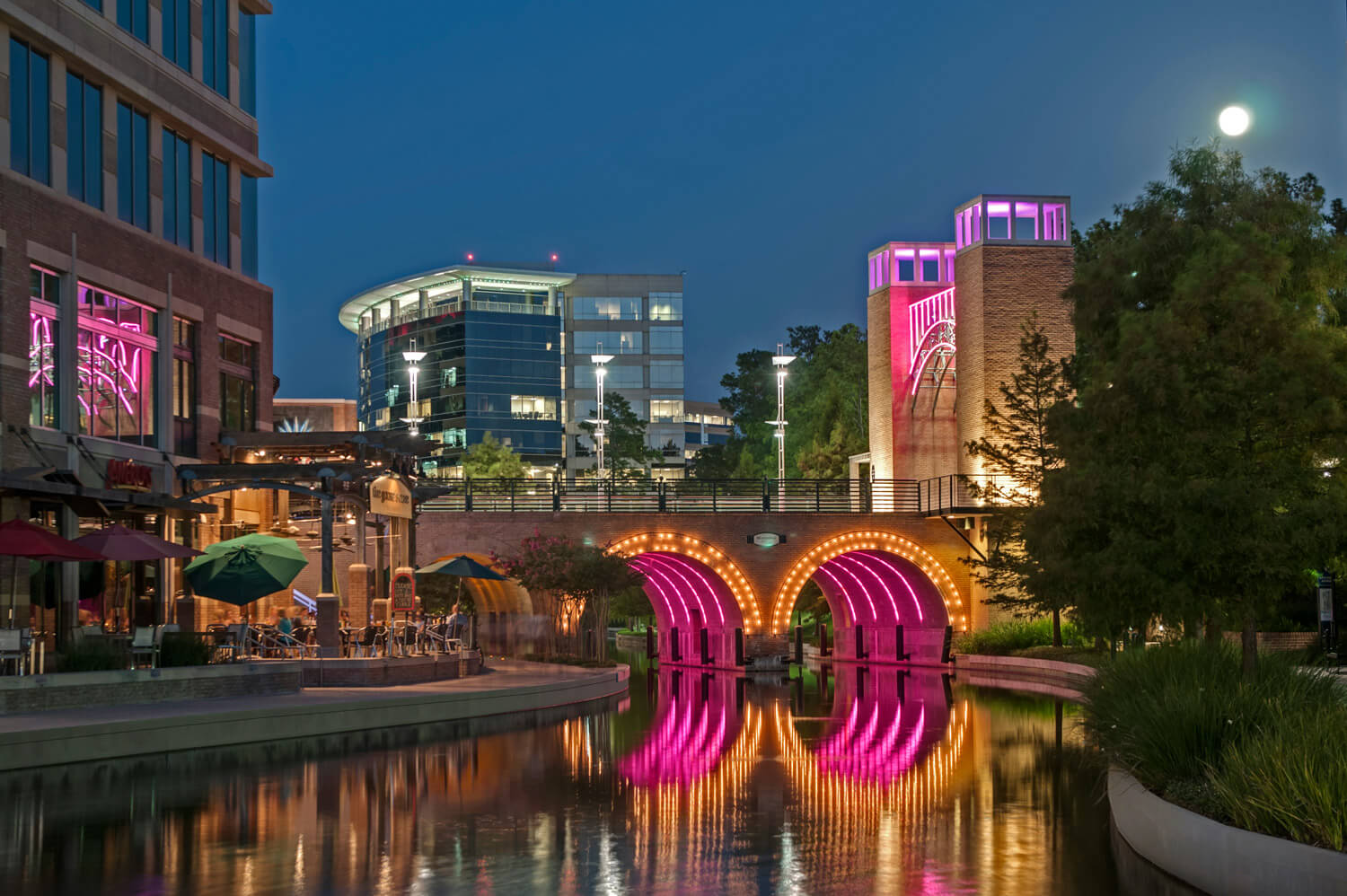 I want to know more.

Page load link
We use cookies on our website to give you the most relevant experience by remembering your preferences and repeat visits. By clicking “Accept”, you consent to the use of ALL the cookies.
Do not sell my personal information.
Cookie SettingsAccept
Manage consent

This website uses cookies to improve your experience while you navigate through the website. Out of these, the cookies that are categorized as necessary are stored on your browser as they are essential for the working of basic functionalities of the website. We also use third-party cookies that help us analyze and understand how you use this website. These cookies will be stored in your browser only with your consent. You also have the option to opt-out of these cookies. But opting out of some of these cookies may affect your browsing experience.
Necessary Always Enabled
Necessary cookies are absolutely essential for the website to function properly. These cookies ensure basic functionalities and security features of the website, anonymously.
Functional
Functional cookies help to perform certain functionalities like sharing the content of the website on social media platforms, collect feedbacks, and other third-party features.
Performance
Performance cookies are used to understand and analyze the key performance indexes of the website which helps in delivering a better user experience for the visitors.
Analytics
Analytical cookies are used to understand how visitors interact with the website. These cookies help provide information on metrics the number of visitors, bounce rate, traffic source, etc.
Advertisement
Advertisement cookies are used to provide visitors with relevant ads and marketing campaigns. These cookies track visitors across websites and collect information to provide customized ads.
Others
Other uncategorized cookies are those that are being analyzed and have not been classified into a category as yet.
SAVE & ACCEPT